Published by Jaci Stephens on

POSTPONED DUE TO COVID-19

Come join us for an informative talk at Lyn-Genet’s Kitchen. Different speakers every Wednesday! Reservations recommended.

The research is clear, much of what causes depression is based on inflammation and gut function. Delve into

In 2004, Aleta became a testament to the power of her methods of positive energy transformation when she made worldwide news as the first woman in America to give birth to twins at age 57. Today at 72, she raises her teens as a single mom; is in high demand among clients in her thriving fulltime practice; hosts lectures, workshops and retreats—all with just as much energy as she did at 35. Aleta will discuss how she finds and releases the limited belief systems that create deterioration and dis-ease. She will teach you how to “clear-shift-recreate” a new reality based on her own mantra of “winding up, not down” at any age. 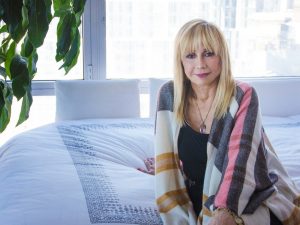 Aleta St. James is a world-renowned energy healer, life coach, and critically acclaimed author, whose powerful “Life Shift” healing system centers on finding and removing the blocks that prevent you from living your best life and shifting into success and joy. She has studied with the spiritual masters in the temples of southern India and central Brazil, the jungles of Peru, and the heights of Machu Picchu and brings over four decades of experience in energy healing and life coaching to her practice. Her clients including doctors, celebrities, fashion executives and CEOs, many of whom credit her for helping them realize their dreams—from career success, to financial freedom, to manifesting successful pregnancies. Aleta’s work has attracted attention from notable journalists, such as Katie Couric and Diane Sawyer. She has been featured on The Today Show, NBC’s Dateline, Good Morning America, and CNN.

POSTPONED DUE TO COVID-19